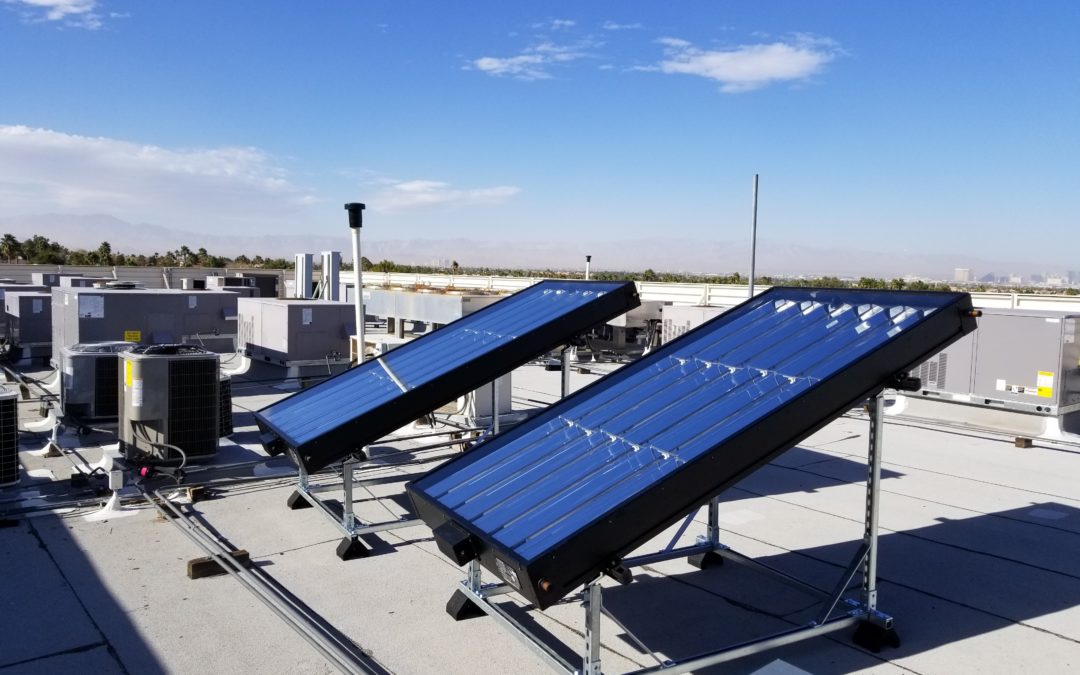 Many Nevada cultivators have just finished their first full summer harvest. Following such a huge accomplishment, many growers are reviewing how things went to see what they might do differently next year and how to better combat the cost of doing business in the unrelenting desert heat. With summer energy bills weighing in as a significant budgetary item, that’s certainly one of the major costs to examine.

“Cultivation facilities are now beginning to experience price pressure on their per-pound cost. The SunTrac system focuses on reducing air conditioning or HVAC system electrical usage which is one cost-saving fix that is both economically and environmentally beneficial,” explains Rich Cooley, CEO of SunTrac USA, the manufacturer of SunTrac’s Hybrid Climate Systems. “SunTrac systems can assist in controlling monthly expenses to operate the grow facilities and extract significant value because when you are saving money on your electricity bill it drops straight to your bottom line.”

How does the SunTrac system work?

Rich Cooley: Suntrac Manufactures A Patented Hybrid Thermal Panel System That Is Engineered And Designed For Integration With Residential And Commercial Air Conditioning And Heating Systems. The Suntrac System Features Parabolic Mirrors That Generate And Harness Concentrated Solar Thermal Energy To Be The Perfect Blend Of Energy Efficiency And Renewable Energy Bundled Into One System.

What is a solar thermal panel and how will it reduce the electrical use of an air conditioner?

RC: A solar thermal panel collects the sun’s abundant energy and uses the sun’s thermal energy to heat liquids, gasses and other materials. SunTrac is NOT a solar electric system. SunTrac’s solar panel is thermal and does a large portion of the HVAC unit compressor’s job. HVAC compressors add heat and pressure to the refrigeration system. SunTrac’s solar thermal panel does the same thing, but uses no energy compared to the compressor that uses a lot of energy. For an average air conditioner generating 4 to 7-1/2 tons of cooling, all you need is one SunTrac panel which measures 4-foot by 8-foot and does the work of up to 15 solar electric panels. The energy that SunTrac saves is the equivalent of what those 15 traditional solar panels generate and our system installed is well under $10,000. SunTrac systems are modular and expandable for HVAC systems from 5 tons up to 500+ tons.

What is one of the biggest misconceptions about solar energy (thermal vs. electric)?

RC: Everybody generally thinks all solar energy is either a solar water heater or it’s solar electric panels that cover your roof. So, when they think about solar panels and air conditioners they think of dozens and dozens of panels, if not more, that generate electricity to power the air conditioner. There is a misconception that all solar is one of the two categories I mentioned. SunTrac is the first major firm to bring solar thermal in this particular application to market, which requires a small footprint to install, and is cost effective for virtually all HVAC systems.

Why is a SunTrac Hybrid Climate System ideal for a cannabis cultivation?

RC: Using SunTrac and variable capacity equipment helps growers fine tune the cooling load as well as their humidity control so they can get precise heating, cooling and environmental control. While maintaining the proper environment for growing, cultivators also want to be able to control their operating costs. We help them save money and energy by reducing the amount of electricity their HVAC system uses. Between the electricity they use for lights as well as for their HVAC system, many growers are paying additional utility demand charges which happen in the afternoon and other peak times of energy usage. SunTrac generates the most thermal energy, providing the most efficiency, during the high heat times of the day year-round. We help grow houses avoid higher demand charges for energy spikes in the heat of the day especially in the desert Southwest. SunTrac helps when it hurts the most.

What kind of cost savings can a grow facility expect when using a SunTrac system?

RC: HVAC systems and air conditioners using SunTrac technology reduce their energy use by 25 to 40 percent, not only saving significant energy but also significant money. Additionally, the SunTrac system qualifies for a 30 percent federal tax credit and a five-year accelerated depreciation schedule. By using a SunTrac system, a grower can pay for his entire air conditioning system in a timeframe of seven to eight years on average. He or she will have regained all the capital they will have expended on their HVAC systems. SunTrac equipped air conditioning systems are the only HVAC systems that actually pay for themselves.

What kind of effect does SunTrac have on a cultivation’s carbon footprint?

RC: SunTrac benefits customers because it saves them money on the electric costs of running their HVAC systems, but it also has a positive effect on the environment. For every 10,000 SunTrac thermal panels installed, we save over 39 million kilowatt hours of energy a year which equals 59 million lbs. of CO2 emissions. By displacing and reducing energy demand this, in turn, saves our customers an estimated $4 million dollars a year in electricity costs. The fact that SunTrac offers significant savings as well as reduces our carbon footprint is a big win for our customers and the environment.